Nathanael has been a professional interpreter for over 10 years.  He has completed his degree and studied how to take words from English to ASL and ASL to English.  Interpreting ASL as with any language is difficult. There is a differences in grammar and syntax.  One does not simply listen and spit out the signs, concept is interpreted. It takes a professional to understand context, idioms, and give them to someone else hopefully with it's meaning in entirety.


In the United States it is the law to provide interpreters.  When going to a doctor's office, meeting, or even school; it isn't just expected it's required. 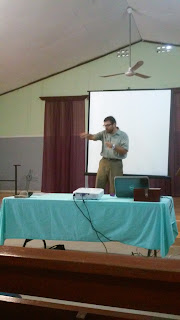 In Belize the first interpreters started working in schools just a few years ago.  Up until now they were former teachers who knew some signs or people who had picked up signs.

In Orange Walk, Nathanael has many hats.  As we wrote in a previous post, he spends 3 afternoons a week disciplining Deaf men in the area and 1 day in Belize city.

Interpreting is another "hat" that Nathanael wears often.  He has gone to doctor's appointments, work meetings and more.  Two separate men have had improvements in their jobs.  They now have a ability to communicate at a greater level with their co-workers. They can discuss issues, and understand what is being asked of them. 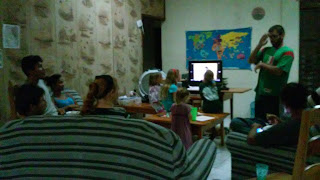 Nathanael is honored to be able to facilitate communication.  He has great goals to provide access to all of the Deaf in Orange Walk.
Na
and as a bonus..

Can anyone guess what song Ni and Josue are singing?