One thing that they tell you when you learn about how to care for Third Culture kids is they have to say goodbye often, more often than most kids.  Honestly, all of us have had more goodbyes than I feel like I can count.

The interesting concept surrounding goodbyes is I'm not sure we now are aware of how to "do them better". They are still difficult. We still struggle emotionally. There is a line in a song by Owl City:

I'm weird because I hate goodbyes


I really dislike this line. I believe we all hate goodbyes. They are difficult. They bring grief, they require us to find a new normal. 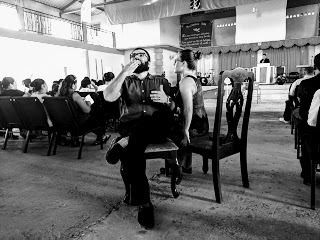 Nathanael and I interpreting. Me Spanish to English, Nathanael English to ASL


About a month ago, Alma's father passed. He had been sick for a while.  She doesn't have a good way to communicate with us. Nathanael pulled on to her road and noticed it was blocked off for a wake.  Some inquiries lead to the conclusion that yes her father had passed.  Nathanael finished picking up people for church. At church, it was decided that we would attend the funeral. We cleaned up and crowded into the van. 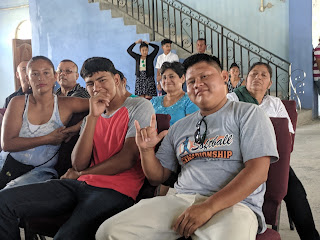 The Deaf who came to support Alma


We found a place for the Deaf to sit. Nathanael and I also obtained two chairs so that we could interpret. Alma was able to have the service and burial interpreted. 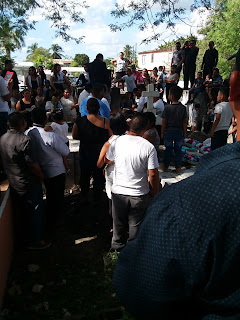 
A not so significant but still difficult goodbye happened for us last week. We have 4 dogs. One of our dogs' Cookies, passed. She was Selah's dog. The most "rebellious" (she found multiple ways to get out of the gate). She was ever faithful to come back. We found more and more stuffed animals that she must've picked out of other's trash in our yard. Selah buried Cookies with the stuffed animal that appeared to be her favorite. We had to go out in the bush and find a place to put her. Selah decorated a stone block to put her memory on. 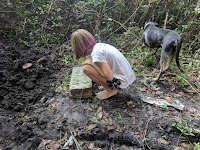 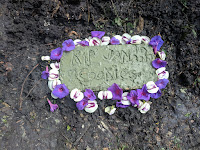 There are also the unexpected goodbyes that happen often. A short term team comes down, we make a connection and say goodbye. One that is not so difficult is Hipolito. He works across the border in Bacalar, Mexico.  He takes care of a training center there. Pastors from Mexico and Central America train to work with kids in their communities.  He also travels and encourages pastors in their congratulations. We had the privilege of staying at the training center a few days in November.  Zephaniah made a connection with Hipolito, following him around talking to him and playing with him.  Fortunately, Hipolito often comes for events that Koinonia has. Zephaniah says that Hipolito is his best Mexican Friend. 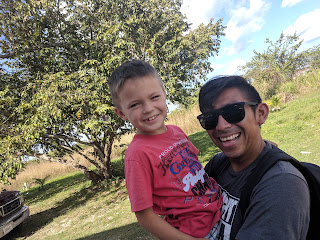 
Yes, I do hate goodbyes. At the same time, I wouldn't change the connections, love, and relationships we have gained. 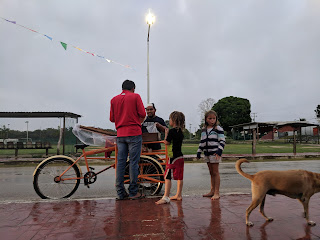 
Please be praying for Alma's family.  Also, Abigail and I head to Stann Creek district today to work with Kids Konnect. If you would like to pray with us, here is a sign up:

PS: I am trying to regularly send out prayer emails via email (every two weeks) if you would like to receive them and aren't, you can sign up to get them.
Posted by Davis Family at 6:57 AM 2 comments:

The New Years eve party was a tradition started by Nancy. It always promises a full house, food and fellowship. This year didn't disappoint. 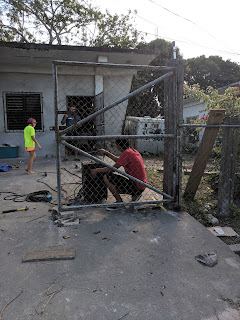 Nathanael and Misael set up for the party, which involved welding the broken gate

Nathanael had a small devotion. 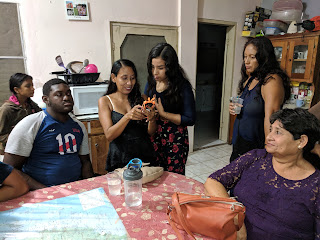 
We then broke out games and food. 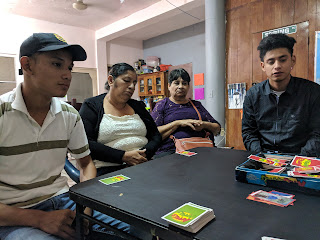 
I made chicken chili which is a church favorite. Two instant pots full got eaten! 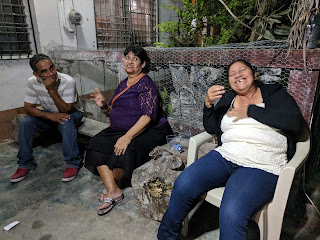 
The children lit some fireworks. 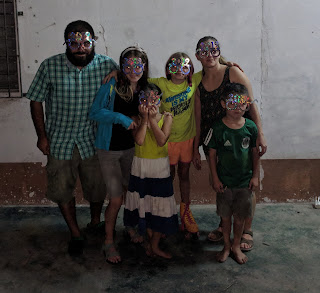 
The church went to the park for the big celebration at 12 am.

Nathanael dropped kids off. He arrived home around 2am.  The neighbor got a new sound system which he used. I finally was able to fall asleep at 3:30am with ear plugs and the fan by my head. 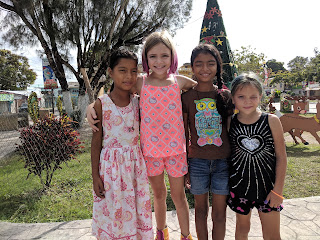 Adrene, Selah, Morene and Zion stopped in the park for a picture on their way home


The next day Nathanael drove Moriene and Adrene home. I slept until 11 am. Our friends from Koinonia invited us for lunch. Sandra who came for the party also came. Lunch was a mix of Spanish, ASL and English. What fun. No pork and sauerkraut for us. Dirty rice with chicken was well received! 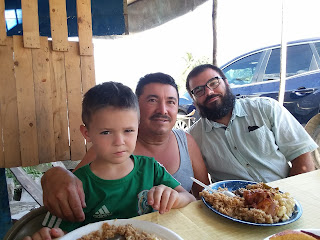 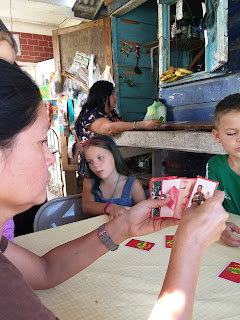 Apples to Apples pictures really is our "go to" game in situations where there is language mixing.  All 12 people (3 Spanish speaking, one Deaf) were able to enjoy the game together

We enjoyed ringing in the New year.

May your New Year be blessed!

Spring and the Davis family


Posted by Davis Family at 6:32 PM No comments:

Presents, staying up late and lice, Oh My!

This is our third time we have celebrated Christmas in Belize.  That is comforting to us. We kind of know what to expect, we are feeling "settled".  We have developed some traditions and adopted new ones this year. 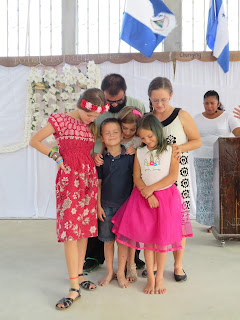 Koinonia prays for us on a Sunday morning

To begin the holiday season we had a new tradition with friends from Stann Creek, the Groff family. They also serve with EMM, and it is a blessing to be in Belize together.  We occasionally get together. It is difficult at times, since their kids are in school during the week, and we have weekend commitments. We decided to get together for Thanksgiving but were unable to until closer to Christmas vacation. 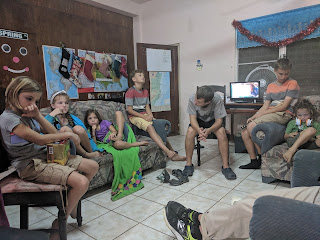 playing a quiz game with the Groffs

Tim decided to call it Friendsmasgiving. It turned out to be the perfect name.  We had a great time eating a traditional American Thanksgiving Dinner, hanging out and playing board games.  Of course, we enjoyed Bubble Tea, our favorite Orange Walk drink. 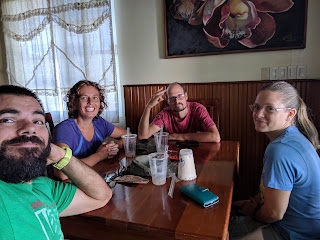 
Christmas Eve is what Belizeans celebrate as Christmas. It is often brought in with a "bang" ie fireworks.  We stayed up till 2am at Pastor Ed's house, playing games, eating and hanging out. 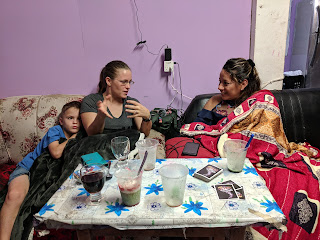 Dyna and I chatting Christmas eve. Zephaniah eventually fell asleep next to me


Christmas day we spent as a family. The brunch was awesome. For some reason, our dinner was kind of a flop. Everyone survived. ;) 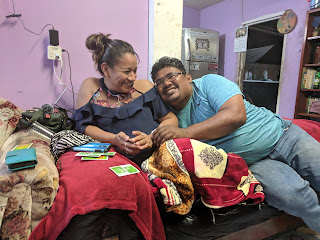 
We had two cookie parties. One with local friends, and one with the Deaf Youth.  At the end of it all I was exhausted. Thankfully Anna came and cleaned/washed the dishes. 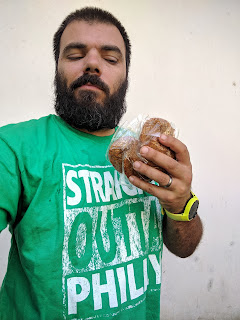 a wonderful family sent Oatmeal cream pies. Nathanael says they "made" his Christmas

While we worked on cookies, Nathanael and Misael took the three wheeler to villages. They invited the Deaf in villages to our New Years Eve party. 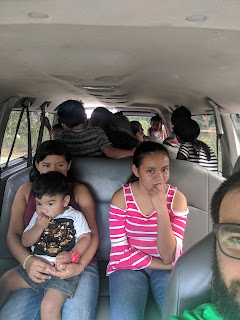 The van packed full before our first cookie party 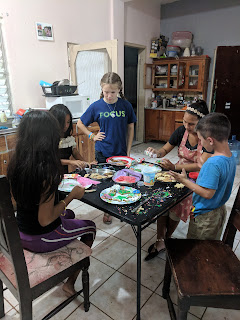 One not so fun thing that happened in our house over Christmas vacation was lice. They were discovered immediately following the Groff visit.  I spent way more time than I wanted to picking out nits.  The good news out of all of this is I've found the best method that works for us! Now to get a nit comb that works! I had to pull every nit out by hand.  If you were wondering, that is why Ni lost his dreds. He is actually fine about it. Since kids here can't wear them to school, there are no boys his age who have them. I was probably more upset about him losing them than he was. 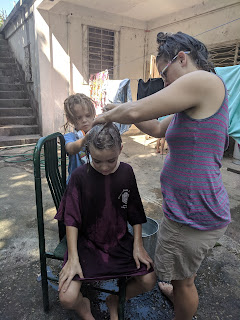 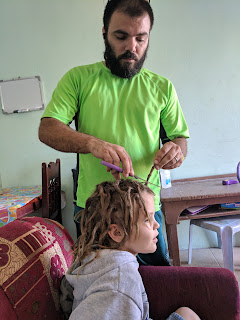 there go the dreds

Posted by Davis Family at 7:15 AM No comments: