Nathanael and I spent 10 days in Belize in 2013.  We got to meet some of the people at Jesus Deaf Church. We walked around Orange Walk and ate tacos off the street.  We prayed that God would make it clear to us, this call to missions we felt  in our hearts.  Were we called to Orange Walk?  He did make it clear.  That is an awesome story for a different time 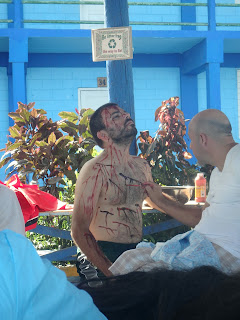 3 years ago this week, was the first time we landed in Orange Walk.  God clearly spoke to Nathanael and I.  We took steps, applied to EMM, prayed and asked people to be a part of our MST, raised funds, rented out our house, waited a year; and finally in August 2015 we arrived as a family. 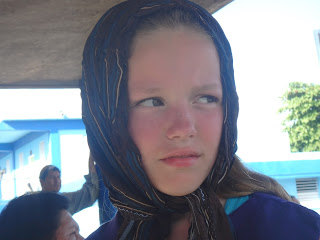 We may have thought we knew what we were getting into but life has shown me over and over again that we really didn't.  As a whole, we have grown these past 6 months.  Our children have a deeper greater understanding of the global world.  They have met friends who live in different corners of the world. 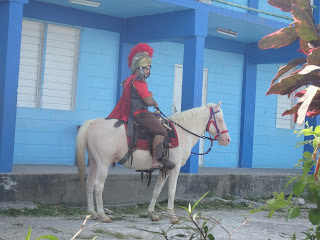 Was it what we expected?  I am not sure. I tend to hold expectations very loosely as they often get us into trouble when they don't come to fruition.  I do know God has been here. It is him who has answered prayers and he who has caused growth. 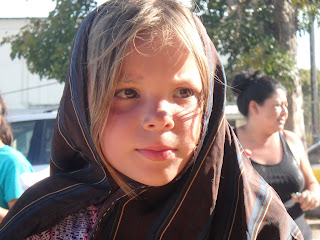 This past Friday (Good Friday), we went as a family to go on the "Cross Walk. " They do 14 stages of the crucifixion of Jesus.  Since I'm not catholic, I really even now couldn't tell you what each stage is.  We arrived to the church early.  3 years ago Nathanael and I got to do this in Orange Walk and we were excited about our children getting to experience it.

We stood outside of the catholic church during the mass.  As we were waiting, a man approached Nathanael about being a part of the stations. 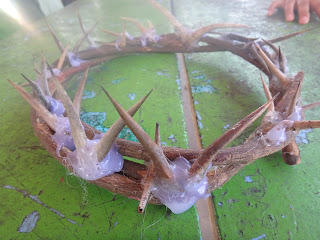 We were a bit taken aback.  Nathanael's response was "I'm not Catholic" which apparently didn't matter. It didn't matter that he's American either. 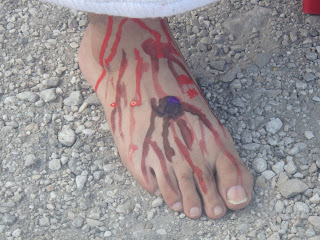 I personally imagine that this is not how things happen "in the states" when one plans for a cross walk, one makes sure to have enough people for the parts weeks in advance. 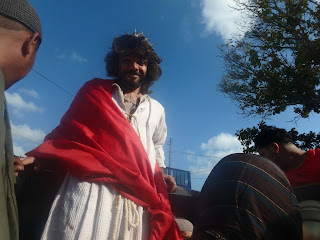 Nathanael got painted up. Abigail and Zion got to dress up and be a part of things as well.  The people who did the costumes were quite happy that Nathanael has a good beard! They got to participate in the fifth and 11th stations. 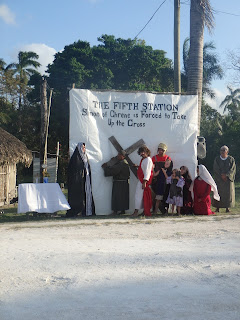 Zephaniah and I followed the crowd from the fifth station through to the 11th. I got some footage of the other stations. 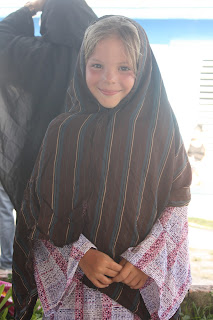 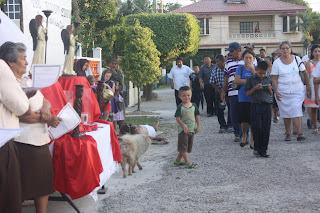 All in all we had a great time.  It was totally unexpected and a bit exhausting! It is a few mile walk.  Zephaniah was exhausted after our week in Placencia. 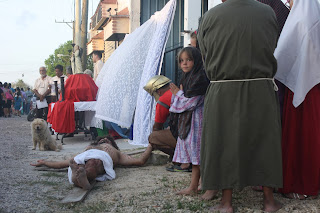 After it was over we even got to have a small "dinner" (chips, dip and tang) with the other people who participated. 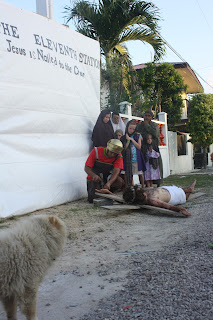 When we arrived home, I still had a load of wash in the washer.  We ate dinner and I went outside to hang wash. (my father would be proud).  I was standing hanging the wash when a vehicle pulled up.  A man got out and signed to me.  Some of the people from Spanish Lookout were in Orange walk and were driving around looking for our house.  I was standing outside and they recognized me. Had I not been hanging wash at that moment, we would have missed the opportunity to have guests. 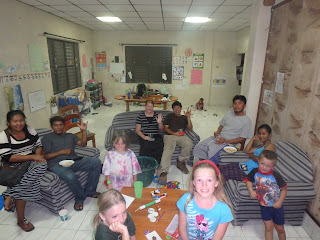 This week we are thankful for the unexpected in our lives. Unexpected things, unexpected growth, unexpected richness of life.  We truly are blessed.

Here is Abigail's youtube channel version of the walk: