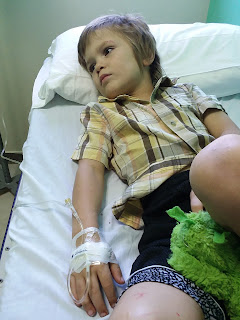 
I had one of my biggest scares recently. I say recently because there was this night in Mexico... I will refrain from the details because I haven't told my mother about that night. If you want to know the Mexico details ask me in person. 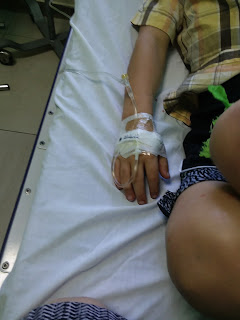 Our most recent scare in Belize had to do with Zephaniah. He has this crazy habit of bed jumping. I don't just mean jumping on beds, but jumping around, in, on top of, off the floor craziness.

This past Wednesday he was all into his craziness (and I had told him to stop several times. When I heard the hollow smack of head hitting pavement. (all of our floors are cement and tile) Zion ran for some ice.  Zephaniah just lay there for a while. 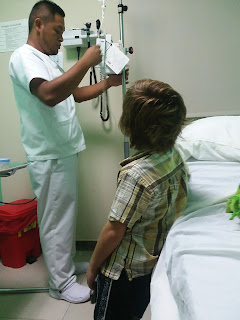 He was responsive but groggy. A similar thing happened to Zion 2 years ago when she flew over the handles of her bike. As a medical person, I realize that there isn't much to do for a minor head injury. He felt so bad he wouldn't even allow himself to be helped to lie on a bed. 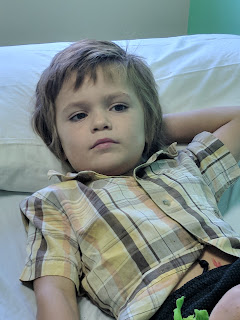 I had scheduled a skype call to a friend. He stayed next to me.  I was okay with his progress until he started throwing up. I admittedly was in the call, Zion had to tell me that he not only threw up but was too tired to exit the bathroom. (He lay on the floor with a pillow near the toilet). 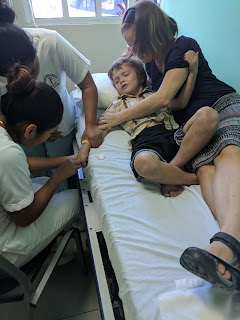 I have been a nurse for 14 years. I am aware that I'm always a mom first. When I am concerned I call my mom. She agreed I should take him to the hospital.  We packed up Zephaniah, Zion and locked up the house. 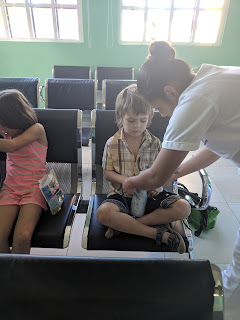 The doctor who saw him was also concerned.  She drew blood, and started an IV after getting the nurse's vital signs. Although they have a CT scanner, she felt that observing him was the most important. If he continued to show signs of brain injury, she would get a CT scan. 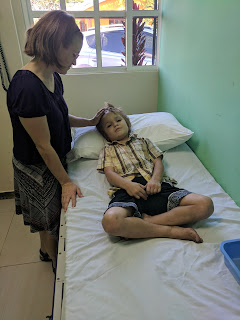 I have been reading the book Radium girls (about the women in the 1900's who got cancer and died from painting radium on watches) I was fine with waiting and reducing his exposure to radiation.

When we entered the hospital, I had to carry Zephaniah. he was pale and nauseous.

The doctor had him stay for 4 hours and gave him IV fluids. Zephaniah got progressively better, and more bored! At one point, he decided he wanted to know how to raise and lower the bed.

As he got better I could tell he was okay.  It wasn't till we got home that the reality of what happened hit me. It really could have been much worse. I had also been scared about the level of care that would be provided to him. I was very impressed with the medical staff. 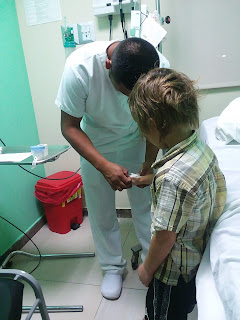 Fear is a funny thing. It causes us to react in ways we shouldn't, to try to protect ourselves, or place our trust in something other than God. For me it was a moment I hadn't considered much. God did protect Zephaniah. I was reacting to the idea that he might not be "safe" here as he is in Pennsylvania.

The truth is he might not be. I have to learn to trust who God is and how much he loves us, no matter what the circumstances. It was good to be thinking and praying about what this looks like in our daily walk with him.

Have a good week,