This past Thursday afternoon things were all set.  Nathanael would borrow Nancy's van, the children went with him.  I was staying home to finish wash and get the house set up.  About 25 min after they left, I got a text message.

The clutch on the van was stuck. Nathanael could not drive. My whole family was stuck by the side of the road baking in the sun.  At first Nathanael asked if I could jump on a bus to pick up Joel and Heidi.  Instead of doing that, he spoke to our taxi driver friend.

Our friend stopped by to pick up the kids (who could identify Joel and Heidi); rescuing them from the sun.  Nathanael stayed with the van till Nancy's mechanic could pick it up.  Fortunately Joel and Heidi are pretty "Go with the Flow". They were okay with the fact that we weren't at the airport immediately after their arrival

They were able to meet our dear friend Jose.  You can see some pictures of him and his family on Lucianna's post.  Jose has now rescued us several times with his taxi service!  We are blessed to know him.

Friday, Joel and Heidi explored Orange Walk with us. Selah of course insisted that the first thing we do was to  have some Bubble Tea.  After walking and having some tacos, Joel and Heidi allowed us the privilege of an afternoon date!

Jose stopped by before we left on Friday to have a spiritual discussion.  It was a privilege to pray with and for him. 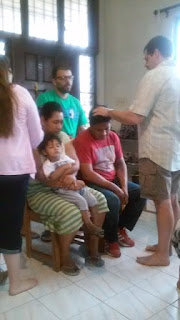 Lest anyone think that Joel and Heidi came to vacation; I will clear things up for you.  Both were a huge help.  Due to there not being a church van; Nathanael had to help pick up people (usually Nancy does this).  Joel and Heidi did a thorough cleaning of the church. I cleaned the bathrooms and cooked hot dogs. Joel said he encountered a few roaches in his sweeping.  I am thankful I didn't have to see them this time. Heidi also sat in the back of the church and played with children while their parents watched. I wish I had pictures, apparently we were all too busy to take some! 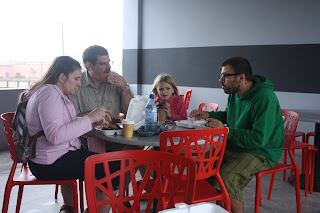 Saturday we had plans to go to Lamanai Ruins. (The ones we visited with Chang-He and Greg) It was rainy and a chilly 65 degrees pretty much all day.  We instead used the borrowed vehicle to see a little of Belize City. Joel and Heidi got some gifts to bring home. 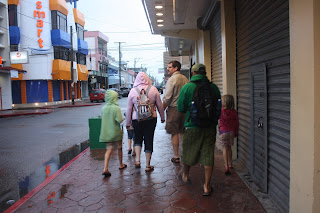 Almost the whole time Joel and Heidi were here it's been unseasonably cold!  We even picked up a jacket for Abigail in Belize city, since she hadn't had one.

Apparently all of my good pictures I am saving for the next post about our visit to Dangriga. Stay tuned :)
Posted by Davis Family at 9:10 PM