The official language of Belize is English. It was a colonized British colony until 1981.  Most people who know a little bit of Belizean history know this.

Living in Belize presents a different picture. Yes English is the official language.  It does seem that it is the language in the street. That being said it's mostly the people's second language.  Nathanael likes to say that the US is the most diverse country he's ever been to, Belize is the second. 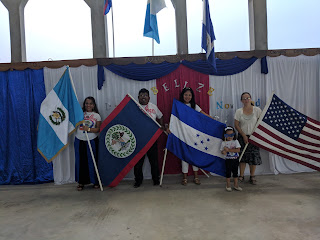 the different countries represented at Koinonia

The most frequent languages spoken are Spanish and Kreol.  There are also many Chinese, Indian, and Nigerian immigrants, not to mention the Garifuna people.

In our house, we speak English. Nathanael's second language is ASL (obviously) and mine is Spanish.  I never went to school for Spanish beyond level 2 in college. We are trying to navigate helping our kids become second and third language users while figuring that out ourselves. 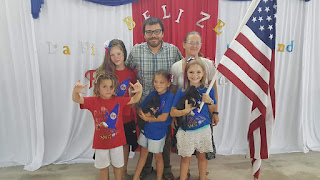 A celebration of culture


I (Spring) struggle with understanding the Kreol. Nathanael has a good grip on it. Our kids have some of the words down (like Ketch which is tag here).  There is also a mixing that happens (as I referred to in the last post) It is funny that I can go workout, and yet there are so many things I miss. I know English and Spanish, but I don't always understand what they are saying. The mixture of words is confusing for a second language user. (that and the accent) 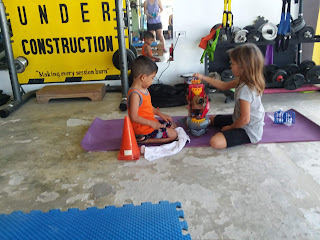 Zion and Zephaniah often come with me to work out, other moms also bring their kids


Two weeks ago we had surprise visitors. We saw a family at the local hostel. The hostel was full, they were unsure of where to go. On a whim, Nathanael offered for them to stay in the apartment. It was a couple with a daughter the same age as Zion.  They are riding their bikes across Central America. What initially attracted them to me was the fact that they had a tandem, and the exact tandem I had wanted for Nathanael and I. 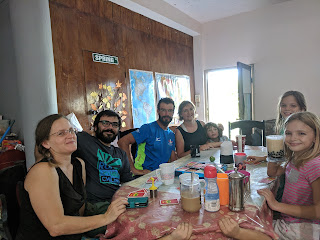 we ate a meal together with the French Family


We got to spend two days with them.  Communication consisted of halted Spanish and lots of use of Google Translate. Why you ask? They are from France. Their second language was Spanish.  Nathanael actually did a better job communicating. I guess I speak too fast?  Nathanael also has a degree in communication and I don't. 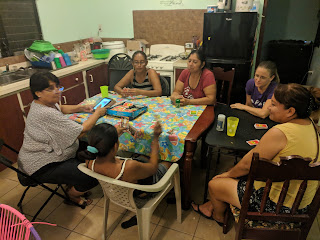 All of this to say we're still learning. I have worked at engaging in ASL. Nathanael is learning some Spanish. Abigail and Selah are each taking classes in ASL and Spanish for school. 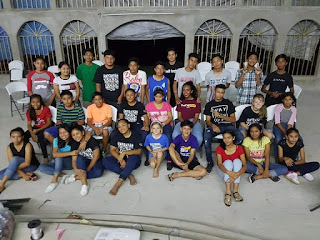 Abigail and Selah at youth group this past week

When the rubber meets the road though?  We are getting closer and closer (slowly) to be better communicators. 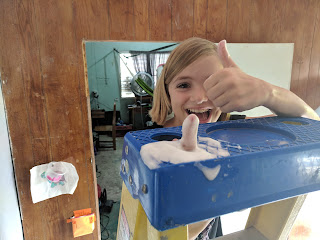 for "fun" Selah stuck her finger through the hole in the ladder. She was smiling about it but it was stuck for about 15 min. We had to use oil and soap to get it out.

Hope you have a lovely week!