I have mentioned in one of our letters that Nathanael desired to keep things the same as Nancy had done them. He followed the same order of service, van pick up schedule, and traditions. 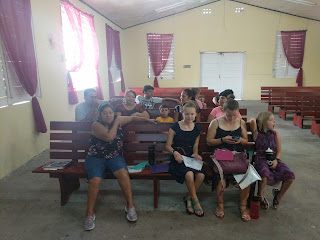 
In the beginning, the words were grating. We often heard "that's not how Nancy did it" . At first it felt like an insult. Then we recognised they were just stating facts.  We came to the realization that no matter how much we followed what she did, we are not her. She left after 12 years and she left a legacy. We are thankful to be here, but by default we are different. 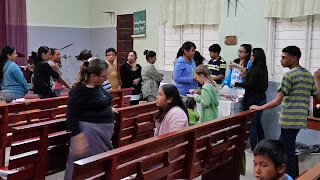 That being said, the order of service is basically the same. Let me take a step back though.  Church starts on Tuesday.  Nathanael works at his sermon prep.  He puts a lot of work into making it visual, and applicable. 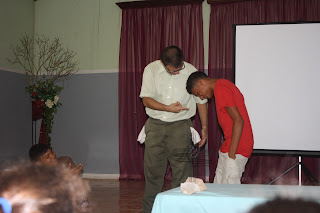 Nathanael 2 years ago doing a drama


When we first arrived, he was unsure of where to begin. How should his sermons focus be determined?  As he prayed about it, and worked here, he felt God's tug to start with basics. He is currently preaching through the Bible. He uses the book The Story as a guide. 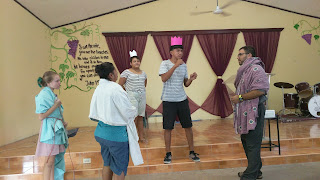 Drama day at church, we do these once a month

He spends time both reading the stories in the Bible a few times, listening to them, and watching them interpreted into ASL.  He then makes a powerpoint presentation.  He uses many pictures to illustrate and help explain. 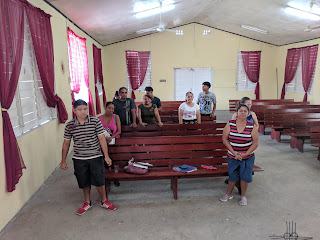 So what happens on a Sunday?  Saturday night, Nathanael messages every Deaf person in the area to ask if they will be attending church.  This helps him plan out his pick up route.  He preps the Tang that we have for break time, and loads the van 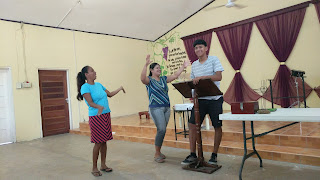 Misael's 18th Birthday, and him getting sung to


I know it's taken me half a blog post to actually get to Sunday morning.

This is what our Sunday morning starts with:

At 8am.
I know I know that's not early for most of you. Really, it shouldn't feel early for us. I have found that I need more sleep living overseas. That and I just don't sleep well. (which is a totally different blog post)

I really considered doing a time lapse video of what the running around looks like then I thought better of it. Really most of you know what running around on Sunday looks like. If you aren't sure:

At 9am, we clamor into the van. Nathanael drives to church.  Sometimes Misael is there, sometimes he isn't. He helps us prepare the area for church.  Nathanael usually leaves 1 or 2 children with me and Misael at church. I do some more cleaning. Misael usually gets some tacos for breakfast. 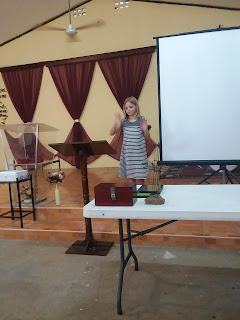 After making his rounds picking people up, Nathanael arrives at church around 10am.  People settle in . They pick songs for worship.
Each person who desires shares a song during worship. Really we don't sing we only sign. The exception being "My God is so Big" which seems to be a current favorite of the youngest members.

After worship there is a sharing time. We are able to share what God has done during the week.
There is a break where everyone enjoys tang. Thankfully there are many different types of tang here. 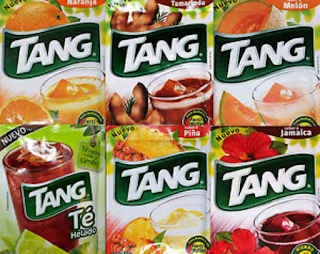 Just a sampling of the Tang we can get here 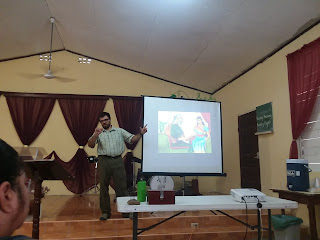 The children are dismissed, I take over Sunday school. In Sunday school there is a lot of play. Recently I've been going through the Jesus Story Book Bible. We try to do an activity or craft related to the story we are studying. Many of the kids don't get read to at home. I relish the opportunity to do this for them. 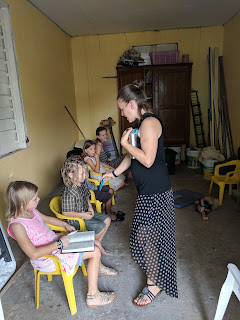 Reading from my phone and showing the kids pictures

After his Sermon, Nathanael gathers the congregation in a circle. They all pray to close the service. He has started having people pray for those who were unable to come.

Before going home, we all snack on chips. We clean up the church, and leave. The drop off happens in reverse. We arrive home.